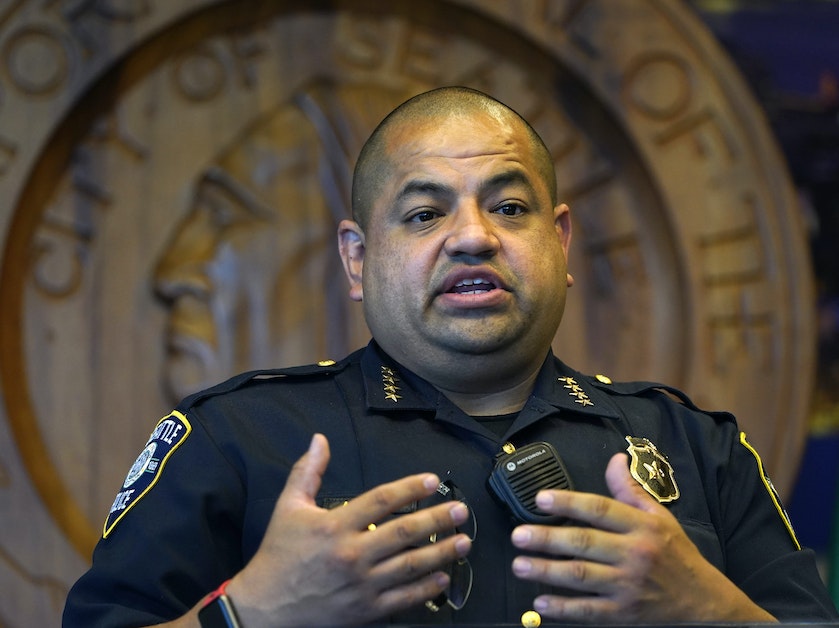 In January, upon his inauguration, Mayor Bruce Harrell said he would hold off on a national search for a permanent police chief, and would instead evaluate interim Chief Adrian Diaz, the acting head of the Seattle Police Department.

Nearly two months later, no other candidates, if there are any, have been named, a city spokesman said. And no decision has been made about whether Chief Diaz will keep the job.

Harrell’s sticking to the schedule he announced in January, and will communicate his approach to filling the position before March ends.

As Harrell approaches his third month in office, his office has signaled that Diaz is the top contender for permanent Seattle police chief.

Monisha Harrell, senior deputy mayor, and the mayor’s niece, told the Asian Pacific Directors Coalition virtual meeting last Wednesday that it’s Chief Diaz’s job to lose, and that a search would commence if “it turns out that he’s not up to it,” according to several people in attendance. Monisha Harrell said Diaz has done “great” so far.

Reached later in the day, the mayor’s office reiterated that no final decision has been made.

“Mayor Harrell thinks it’s very important that Chief Diaz have the opportunity to show his leadership as chief while in this interim position,” said Jamie Housen, the mayor’s director of communications.

Hiring a big city police chief is, normally, an involved and public process. A new mayor will often select a new chief, one in line with their values. Public input is always sought, and the City Council must approve the appointment.

Interim director positions do not undergo the same rigorous vetting. In 2019, in response to “interim” directors holding their positions for years, the Seattle City Council approved resolution 31868, to “ensure that highly competent, inclusive, and dedicated individuals are in key city management positions.”

City Councilmember Teresa Mosqueda, who sponsored the resolution, said by text message that the expectation is “that this process be adhered to whether someone was serving in an interim role or not, and that those searches be robust.”

Lisa Herbold, Seattle city council member and chair of the Public Safety & Human Services Committee, said by email that she was not familiar with there being a limit on how long an executive of any city department could act in an interim capacity.

Diaz has been interim chief for a year and a half. Appointed by former Mayor Jenny Durkan, he assumed the temporary role in September 2020, as the Seattle Police Department’s fate was in flux. Former Police Chief Carmen Best had resigned the month before, partly in response to the City Council’s move to cut department funding.

Diaz is an insider. He has worked at Seattle Police for more than two decades, according to his bio, and he was Carmen Best’s confidante when she was chief.

Housen, of the mayor’s office, said Harrell will continue to evaluate Diaz and the police department, and in keeping with the schedule he announced in January, will update how he will approach a permanent hire before the end of March.

Housen said the mayor will follow the city charter, which requires a “competitive examination.” However, the charter leaves the mayor with some discretion about what that examination looks like. Housen said that as the mayor determines the framework of a potential national search, other candidates may be officially announced.

In October last year, Mayor Harrell told the Northwest Asian Weekly that “former police chiefs from Seattle, as well as others from around the country … (had) already reached out” about the job.

But for now, Diaz is the only named candidate.

As interim chief, Diaz oversees a department struggling with police retention. Some officers felt scorned by police leaders after they gave the call to abandon the East Precinct during the summer 2020 and by public calls for the department to be defunded.

RELATED: We know who made the call to leave Seattle Police’s East Precinct last summer, finally

“Whether I’m considered a top contender or not, I remain 100% dedicated to what I’ve always pursued: ensuring equitable public safety for all,” Chief Diaz said in a statement to KUOW. “I remain dedicated to the Seattle Police Department and will continue to lead its exceptional, professional sworn and civilian employees.”