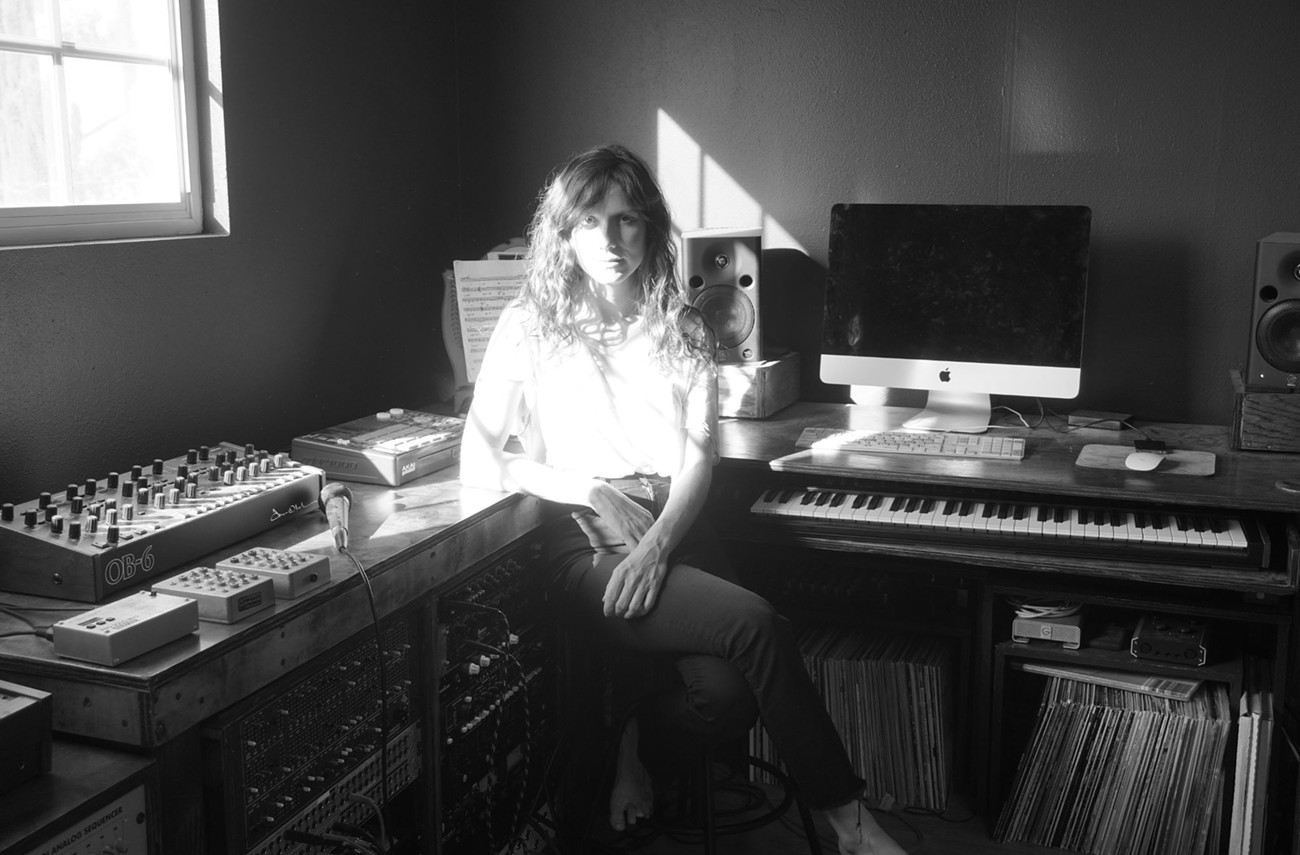 It’s an exceptionally rare pleasure when an unknown artist’s music instantly enraptures you. (By “you,” I mean me.) Veteran music critics are used to 90 percent of songs and albums leaving them feeling meh or downright exasperated. So cheers to Cate Kennan, a Los Angeles keyboardist/guitarist/bassist whose debut album The Arbitrary Dimension of Dreams offers 12 concise episodes of a sonic reverie that buffer you from the world’s horrors with utmost subtlety.

The press release from Kennan’s Post Present Medium label compares her music to that of refined synth masters like Cluster and Harmonia’s Hans-Joachim Roedelius, Tonto’s Expanding Head Band’s Malcolm Cecil, and the English eccentrics in Deux Filles. That’s sort of accurate, but more strongly present are serene yet slightly melancholy moods reminiscent of Boards of Canada and Mort Garson circa Plantasia.

But unlike Boards of Canada’s tracks, low frequencies are scarce on The Arbitrary Dimensions of Dreams; instead, Kennan uses an array of keyboards (Serge Modular, Roland Juno-106, Korg, Wurlitzer, etc.) and guitar to create vaporous and mysterious auras. Hers is an airy sound that never comes off as obvious in its emotional thrust or melodic contours. It’s not exactly chillout music, though it is meditative, and it probably can’t be classified as “healing” music, either, but it does somehow make one feel lighter and more clear-headed.

“Sundial” starts in utter enchantment, with guest guitarist Scott Gilmore’s instrument attaining an almost harp-like delicacy in its hypnotic, graceful ascent while a synth simulates a sighing tone somewhere between a flute and an ocarina. Kennan builds a scenario of utmost tenderness and complex poignancy. I can’t wait to hear more from this promising musician.

The pandemic proved to be a creative boon to Duvall multi-instrumentalist Gel-Sol (Andrew Reichel). He’s claimed to have recorded hundreds of tracks since lockdown, including the two epic ambient joints on the recently released 84-minute kosmische zoner Canadian Mist.

Reichel’s also delved into the stylistically omnivorous world of library music, playing multiple instruments to produce the myriad mood-enhancing sounds which characterize that obscure corner of the music industry. The first fruits of Reichel’s latest obsession surface on the single “Nightshade” b/w “Cuffed & Stuffed,” released by the great local label Wax Thématique. (You can pre-order it here.)

This shift in direction may surprise some. Gel-Sol is better known in Northwest music circles for his heady and sometimes whimsical ambient, Plunderphonic, and krautrock explorations on albums such as Zetaworld, Gel-Sol’s Adventures Beyond the Plunderworld, and Horse Head Bookends. He is also one of the area’s most avid fans of prog rock, heading up the PROG DJ night at Hazlewood Bar. All of these enthusiasms serve Gel-Sol well on this 7-inch.

“Nightshade” creeps in on sly keyboards, haunting cuica moans reminiscent of Airto Moreira’s work with Miles Davis, and skewed cha-cha beats before an incongruously jaunty synth melody plinks skyward, and releases all the tension that the intro built up. Reichel proceeds to stack up three distinct keyboard motifs, each one more enchanting than the last. By the last minute of this 3:33 gem, the listener feels ridiculously hopeful that a better world is possible, somehow… through the sheer beneficence of beguiling melodies and amazing timbres.

This single portends many more interesting permutations on library-music moves from the chameleonic Gel-Sol—an album is in the works for Wax Thématique.