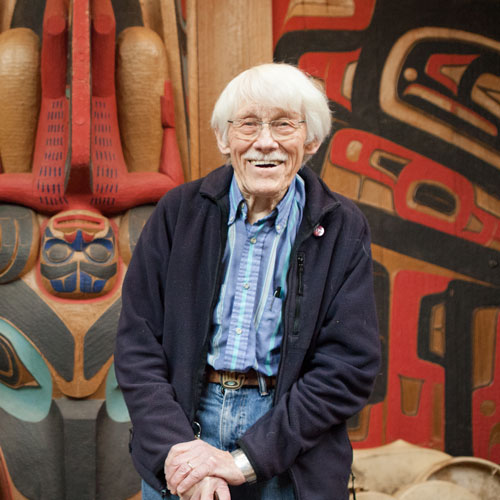 “Most of the days of my life I’ve probably said the word ovoid.  And that’s because of him. Our words for those shapes are gone…So while we are getting to the point where we are thinking about creating new ones, we owe him a debt. But I think that debt is paid back by doing what we are doing,” said Tsimshian artist David Robert Boxley whose formline work was greatly admired by Bill Holm.

As we know from Holm’s discussions of formline, the negative and the positives always define each other. I like to think that this is true in the legacy of generations—as we lose the giants, their energy and spirit stays with everyone who was touched by their lives. On a personal note, I can say that I would not be the person I am today without his influence. I know many others can say the same. Bill showed that it is always about respect, relationships, honesty, intellectual curiosity, and sharing. As Nuu-chah-nulth artist, Joe David said “I am lucky to have lived in the time of Bill Holm.”