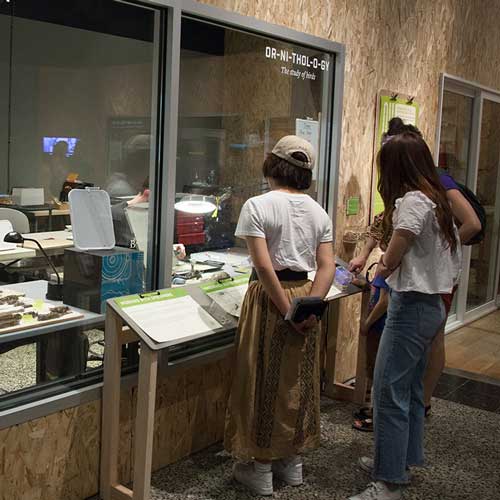 But it is an important part of the “behind-the-scenes” process of a natural history museum to document and preserve life around us—adding to the library of biodiversity that is used by researchers and the public alike.

Specimen preparation can take several forms depending on the type of animal. For birds and many mammals, the process involves removing all of the bones and innards of the specimen and creating an archival “study skin” by stuffing the skin with cotton. The bones are saved and paired with the study skin. In other cases, such as with marine mammals, only the skeleton is preserved. Other specimens, like fish, amphibians and reptiles, are often preserved in jars of ethanol.

The vast majority of specimens that are added to the Burke collection also have a DNA tissue sample removed and added to the genetic resources collection—one of the largest of its kind in the world.

How does the Burke acquire these specimens? Many are found dead and are then collected by trained citizens or Burke staff along with relevant data. Some are confiscated from U.S. Fish & Wildlife and other organizations. And some animals are collected by scientific researchers in an effort to document the biodiversity of a region.

All of the specimens are available to researchers and the public to answer the questions of today—but more importantly they’re in the collection forever and will be a resource to answer questions that haven’t even been asked yet.

In the Burke’s Testing, Testing 1-2-3 exhibit, prototyping the “inside out” museum experience of the New Burke (opening in 2019), visitors could observe museum staff and volunteers carefully preparing birds and small mammals on the other side of a glass window.

Though this process can appear graphic to some people, we set out to learn how visitors would respond to one aspect of what happens behind the scenes of a natural history museum. Overall, the visible specimen prep received a tremendous amount of positive responses from visitors and staff alike!

We asked ornithology student researcher Cooper French and collections interpreter Aletheia Wittman to describe their experiences with introducing the public to specimen preparation.