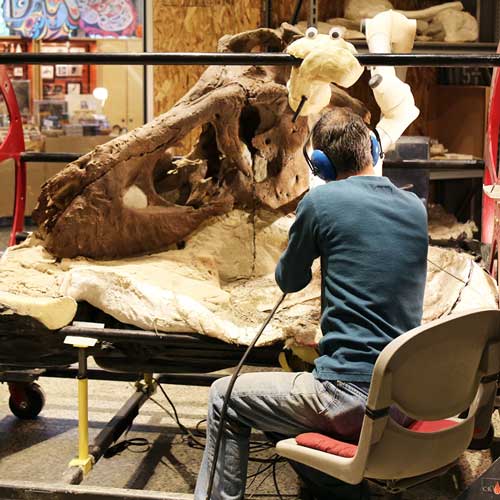 The Burke Museum’s paleontology team continues to make exciting progress preparing the “Tufts-Love” T. rex skull—one of around 15 Tyrannosaurus rex skulls known to exist in the world. The team has now found 100% of the dinosaur’s skull and jaw bones by bone count.

This significant milestone happened during recent exploration into the interior of the skull, where they found the right epipterygoid—a skull bone found in vertebrates. This thin and delicate bone is not often preserved in fossils. The Tufts-Love T. rex’s right epipterygoid is complete, and preserved in the correct anatomical position in the fossil.

In addition, the team has uncovered the left columella. In mammals, this bone is called the stapes—a tiny bone from within the middle ear that is the smallest bone in the human body. It’s also the smallest bone in a T. rex, and is a thin and delicate rod that’s only a few millimeters in diameter. The columella bone is extremely rare to find preserved in a T. rex. As Burke paleontologists continue removing bone from around the fossil, they will look for the right columella.