Seattle is a wonderful place to explore and celebrate the diversity of Latinx, Hispanic, and Latino-identified communities. The following InTENtional List highlights 10 local Latino-owned businesses to explore one gallery, one latte, one pupusa at a time.

Moore Coffee | A picture is worth a thousand words, especially when it is the infinitely Instagrammable latte art at Moore Coffee. The coffee shop was founded by Lupe Chavez and gets its name from the Moore Hotel, where Lupe worked starting in 1995 until opening the first Moore Coffee location just outside the lobby in 2011. Ten years later, Lupe’s daughter Fritzi took over, continuing the family tradition of serving memorable coffee to locals and visitors alike. 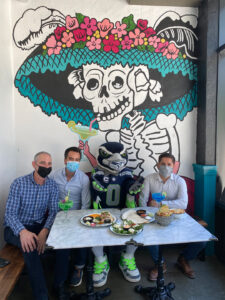 Taqueria Cantina | Co-owner Daniel Ceballos dreamed of opening a restaurant since the age of eight. He got his first job flipping tortillas when he was nine, and has been cooking ever since. In 2016, Daniel’s childhood dream came true and Taqueria Cantina opened in Seattle’s Belltown neighborhood with co-owners Sal Amezquita and Brian Brandell. In 2021, Taqueria Cantina opened a second location at the Harbor Steps, which includes outdoor patios perfect for taking in the city. 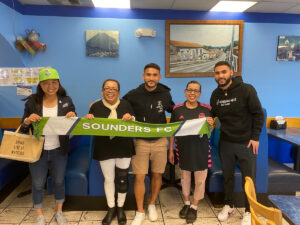 Owners Aminta and Ana of Salvadorean Bakery with Alex and Cristian Roldan of Seattle Sounders FC and Laura Clise of Intentionalist. Intentionalist

Salvadorean Bakery | Ana Castro and Aminta Elgin are sisters whose bakery continues to stand the test of time. Originally from El Salvador, Ana and Aminta have been serving pupusas, cookies, cakes, and a variety of Salvadoran baked treats to the community since 1996. Fun fact: Aminta is a huge soccer fan and has supported youth teams in Seattle and El Salvador. Local fans of her bakery include Seattle Sounders FC brothers Cristian and Alex Roldan.

Nepantla Cultural Arts Gallery | Jake Prendez is a Chicano artist and co-owner of Nepantla Cultural Arts Gallery with his partner Judy Avitia-Gonzalez. Nepantla is a Nahuatl word meaning “the space in the middle” or “torn between ways” and the term is often used to describe an alternative space created by under-resourced communities to heal and engage in strategies of resistance. Stop by to take in the current exhibition and pursue the art and products for sale crafted by local makers. 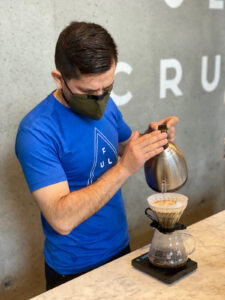 Askatu Bakery, Belltown | Estela Martinez has always had a sweet tooth. When her second child was diagnosed with nearly 50 food allergies as an infant, Estela struggled to find allergen-free baked goods. She began baking first for herself, and then for her family, growing a delicious repertoire of gluten-free, vegan cookies and cakes that don’t include any of the top eight allergens. In 2019, she opened her Bakery, where she shares her sweet creations with a growing community of customers who appreciate that they can indulge worry-free.

Frelard Tamales, Green Lake | This humble walk-up tamaleria in Seattle’s Green Lake neighborhood is both Latino and LGBTQ-owned. Osbaldo Hernandez and his husband Dennis Ramey are at the helm of this family-operated business that prides itself not only on its delicious array of tamales (including vegetarian and vegan options), but also the way that they care for their staff and the local community. 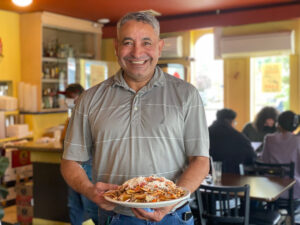 La Cabaña, Greenwood | After two decades in the restaurant industry, in 2015 Selvin Oseguera finally turned his dream of opening a restaurant into a reality. The concept behind his restaurant La Cabaña is simple: showcase Central American cuisine featuring the flavors of Honduras, El Salvador, Guatemala, Nicaragua, and Costa Rica. The result is a delicious destination that more than earns the packed parking lot during peak mealtimes. 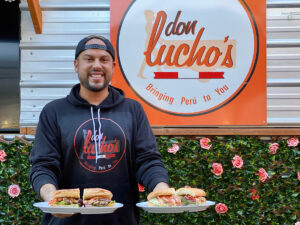 Don Lucho’s, Maple Leaf | Carlo Chalisea was born in Seattle, spent his early childhood in Peru, and moved back to Seattle with his family as a teenager. He started Don Lucho’s in 2013 as Seattle’s first Peruvian food truck, quickly earning a following for his sandwich versions of traditional dishes made from his family’s recipes. In 2019, he opened Don Lucho’s restaurant, which includes plenty of covered outdoor patio seating.

Arepa Venezuelan Kitchen, University District | After moving to Seattle from Venezuela nearly twenty years ago, Felix Valderrama knew he wanted to open a restaurant so that he could share authentic Venezuelan food with the community. He and his wife Kami and their friends opened Arepa Venezuelan Kitchen in 2015. Venezuelan arepas are the focus of the menu, including a variety of delicious meat, vegetarian, and vegan options. For those wanting to explore beyond the arepa options, the Pabellon bowl includes the restaurant’s signature shredded beef, black beans, and sweet plantains on a bed of white rice—it’s Felix’s favorite.

Visit Intentionalist to explore more small businesses and the diverse people behind them year-round.

The founder and CEO of Intentionalist, Laura Clise, is a corporate intrapreneur turned social entrepreneur with a passion for instigating impact at the intersection of business and society. Prior to founding Intentionalist, she held a variety of corporate roles leading sustainability, corporate responsibility, supplier diversity, and external communications. She serves on board of directors for IslandWood and Athlete Ally and can sing and/or order chocolate ice cream in Spanish, German, Italian, Chinese, Cambodian, Hebrew, and Turkish. Laura is an Aspen Institute First Mover Fellow and alumna of Carleton College and the Thunderbird School of Global Management.